After captivating the crowd with Storm Front in 2019, we are upping the ante even more by bringing one of the most entertaining and best-singing groups in the whole Barbershop Society. Crossroads is coming to Santa Barbara on September 18, 2021. We can't wait to share this fantastic quartet with the hometown audience. Mark your calendars now.  Tickets will be available soon, so stay tuned to the website and our Facebook page for up to date information. 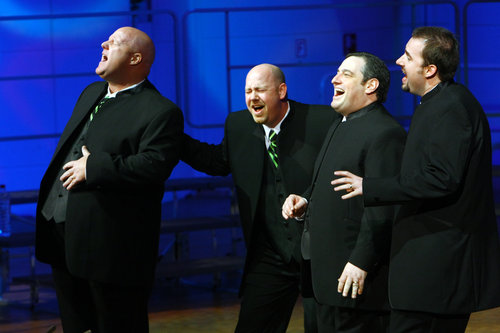 Crossroads is a world champion a cappella quartet made up of four versatile, award winning vocalists. Though steeped in the tradition of Barbershop Harmony, Crossroads enjoys singing a wide variety of musical styles including vocal jazz, blues, gospel, pop classics, and classic American standards. Crossroads was formed when four friends from four different states and four different international champion quartets came together to make a brand new sound. Two years later they were crowned the 2009 Barbershop Harmony Society International Championship Quartet. Since then, they have produced three recordings, and have become one of the most sought after a cappella foursomes in the world, having already performed in Japan, Germany, France, Finland, the U.K., Spain, Poland, Australia and all throughout North America. Notable recent performances have included a concert at world famous Carnegie Hall, guest performers at “La Folle Journee Music Festival in Nantes France, featured national television appearances on “Fox & Friends” and Daystar Network’s, “Gospel Music Showcase”. Crossroads was also named the 2016 recipient of the “Stand For Music Award” for their work in the advocacy and promotion of the music education cause in American public schools. Presented annually by the National Association of Music Educators (NAfME), the award is NAfME’s most prestigious music advocacy honor. In the spring of 2018, Crossroads received "Quartet of the Year" honors, presented by the A cappella Music Awards.

Now consolidated to three states (Tennessee, Missouri and Florida), Crossroads continues to grow musically and attract fans worldwide. Through it all they remain the best of friends and cherish the time spent with the entire Crossroads family.