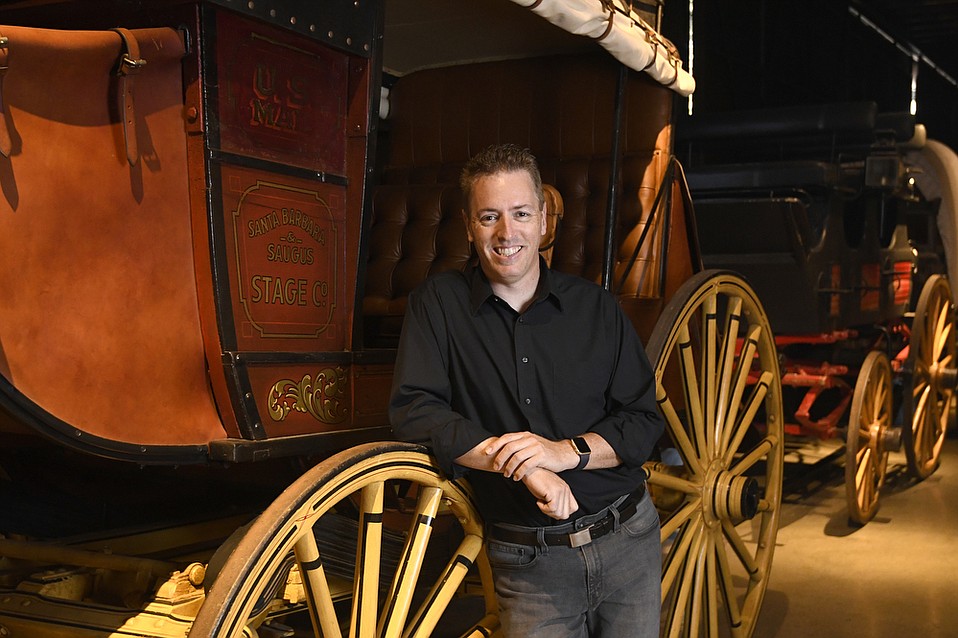 “The stage forces you to sing — act — perform,” Mike McGee tells me. “Over time [on stage], I became more confident in myself and who I am as a person.” McGee — who was born and raised in Goleta — discovered the joy of performing at the age of 14. Last July, Main Street, his barbershop quartet won the Gold Medal at the International Barbershop Quartet Contest where they competed against more than 50 other groups from around the world. Main Street and Mike McGee will be the feature performers at the upcoming Pacific Sound Chorus show on September 16th at the Marjorie Luke Theatre. Coming full circle, Mike is the original founder of Pacific Sound Chorus - the championship men’s barbershop chorus in our area — and was recently made its new director.

McGee attended Dos Pueblos, where he focused on the performing arts — mostly singing. In 1990, right after graduating, he became a performer with the Dapper Dans, the barbershop quartet that performs not only on Main Street at Disneyland, but also at the Magic Kingdom in the Walt Disney World Resort in Orlando. “The first time I performed [at Disneyland], Mike Eisner sat down to watch us,” he recalls. “It was a bit intimidating to have the CEO of the company watching you.”

Eventually McGee switched from performing at Disneyland to stage managing there. He worked for Magic Music Days (now known as Disney Performing Arts) where students get the opportunity to perform in the park. After three years there, he moved to Viacom where he worked in production doing episodic television, including shows such as Diagnosis Murder and Resurrection Blvd. The whole time, he continued to sing with a barber shop quartet called Metropolis. McGee traveled the world and performed every other weekend with the group. “I’ve never had a formal education,” McGee tells me, but through his membership in the Barbershop Harmony Society he was able to take active programs in music education and performance

When McGee married, he moved to Tallahassee, Florida, and in 2010, Tony DeRosa, music director of the Dapper Dans suggested he came down and audition again. “When you become a Dapper Dan you go through 3 weeks of Dapper Dan University,” he says. “In that process you learn 15 organ chime songs and about 25 choreographed routines as well as scripted dialog. It’s pretty intense.” This time, McGee trained in two different roles, baritone and lead. Speaking of the experience, McGee says that “as a performer at Disney, the magic is real.” “You see the changes in people, and they believe in it while they’re there. It’s quite remarkable.” He remained in this second stint with Disney for several years, eventually becoming an entertainment manager at the resort in charge of different events.

One day he had lunch with DeRosa and asked him if the Dapper Dans would ever be able to compete in contests. But, “the Dapper Dans are more nostalgic,” says McGee, so we decided to form a new quartet [featuring former members of the Dans] called Main Street.” Main Street qualified for the 2011 International Barber Shop convention along with 55 other quartets from around the world — everywhere from Sweden to New Zealand. After three rounds in which each group sings two songs, the field is narrowed to just twenty groups, and then to ten. After the round of ten, the judges tabulate the scores and choose a winner. In 2011 Main Street took fifth place, and in 2012, they placed fifth again. For the next three years — 2014, 2015, and 2016 — they came in third. “After 2016 we were burnt out of competing,” he recalls.

“We discussed it and decided the next year, 2017, would be our final one” McGee says. For their final set they chose “Smile” by Charlie Chaplin. “It was very emotional for us for we connected with the song,” he says. “The audience felt the love amongst the quartet.” This time, Main Street came in first and won the gold medal.

In January 2017, Mike got a call from Pacific Sound Chorus’ director Kelly Shepard to say he was moving to Australia and asking if he would he take over.

Mike McGee takes time away from harmonizing to answer the Proust Questionnaire.

Which historical figure do you most identify with?

Walt Disney. Despite running into constant obstacles and nay-sayers along his path he stayed dedicated to his vision.

Offering the opportunity for people to escape reality and enjoy a fun filled show of music, humor and family entertainment. A chance to step away from incendiary topics we face every day in the news and social media.

What is your idea of perfect happiness?

I love traveling with my family. Visiting foreign locations and sharing experiences with people whom I love is important to me.

What is your greatest fear?

Rejection. Specifically, as an artist I am very cautious about assuming that people will accept the work I have created. Even when they show positive expressions of appreciation, I’m still doubtful.

Who do you most admire?

People who can find a happy balance between work and family.

What is your current state of mind?

Elation! Recently I experienced a childhood dream come true and I am still trying to process the experience.

What is the quality you most like in people?

Positive inclusion. Allowing those close to them (at work or at home) to have a voice in the decisions or ideas they face. That’s a sign of a strong leader.

What is the quality you most dislike in people?

Hypocrisy. I’m intolerant to those who criticize others and yet don’t “walk the walk” themselves.

What do you most value in friends?

What is your most marked characteristic?

Kindness and a positive attitude. Life is too short to have negativity as your partner. I choose not to allow hateful influences, such as those found in social media to saturate and dictate my life.

Which words or phrases do you most overuse?

“It is what it is.” Nothing like stating the obvious.

Playing the piano. I took a few lessons when I was a child, but didn’t have the patience to practice. I regret it now.

If you could change one thing about yourself, what would it be?

Be more assertive and stand up for my beliefs and opinions.

What do you consider your greatest achievement?

I’m currently developing a project that will help children in education. I’m proud of what our team has accomplished and the potential it has for greater youth outreach.

Assuming Santa Barbara never existed, I would choose Colorado. I love the Rocky Mountains, the forests and change of seasons.

What is your most treasured possession?

My iPad. My entire life is contained in this 9 x 12 contraption! If there was a fire in the house I would run for the iPad!

What makes you laugh the most?

Fail Army videos, specifically clumsy animals. Something about dogs falling that makes me LOL, providing they weren’t hurt in any way. #petadisclaimer

What is your motto?

“Don’t make a decision based on fear.” — George Lucas

What is your greatest extravagance?

After work I like to relax on my 90-ft Ocean Alexander yacht docked in the harbor and treat myself to a fine Opus One.

On what occasion do you lie?

See that last question regarding the yacht? Well, I don’t drink wine.